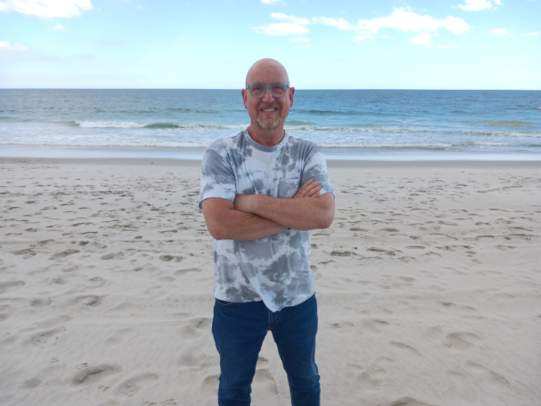 My journey began back in December 2010 when I was diagnosed with male breast cancer at age 50. I felt a cyst under my left nipple, and the doctor referred me to a local surgeon for a needle biopsy as this raised a red flag with him. I had been ignoring the cyst, which had been causing me discomfort for several months, but never mentioned it because I just figured it was a fatty cyst similar to one, I had removed several years earlier with no complications.

I remember waking up in the recovery room shortly after the biopsy and still being really groggy. The doctor came in and told me he did not like what he saw. I was informed a 2.2cm tumor was removed and it tested positive for cancer. The diagnosis was Invasive Ductal Carcinoma and Ductal Carcinoma in Situ. I was floored and did not understand what was happening, as I had never heard of men getting breast cancer. My wife was already in tears, and I asked her to tell me what the doctor was saying. She looked me in the eyes and said he’s telling you that you have Stage Two breast cancer. Still in shock, the doctor said he would take care of everything, and surgery had to be done right away. I was scheduled for surgery five days later.

I learned I’d be having a mastectomy of my left breast. Many feelings and thoughts ran through my mind that day and the following days while I put my affairs in order. I had just lost my sister to a horrible death from breast cancer after it had metastasized to other organs and thought the worst for myself. My wife provided me with as much love and support as humanly possible and if it wasn’t for her this whole journey would have been unbearable.

The last thing I remember before surgery was sliding into position on the operating table. I woke up in recovery bandaged like a mummy and in so much pain. The surgeon came in and told me everything went well. They tested my sentinel node and non-sentinel node, and everything was negative for metastasis. The next day I went home with 23 staples, two drainage bottles hanging from my chest and minus my left breast. Shortly after my recovery I was scheduled for a full body PET scan. Everything came back negative and I did not need chemo or radiation. I also had genetic testing for a BRCA mutation and I was negative.

I took Tamoxifen for eight years, which is what they prescribe to women. I must say that Tamoxifen is not a pleasant drug. It has several undesirable side effects, but I wanted to increase my life expectancy, and this is what the medical field has to offer us men right now. I am twelve years cancer free now and continue to go for blood work and mammograms of my remaining breast. In fact, Patty and I go for our yearly mammograms together then head out to lunch. Oh, but I am not permitted to sit with her in the waiting room. I must sit away from the women.

Since my surgery I began to look for other people like myself. One day I was watching the Katie Couric show. On it was a young man named Bret Miller and the actor Richard Roundtree from the movie Shaft. I immediately said if they can talk about male breast cancer then I can too. I called the Bret Miller 1T Foundation after seeing the information on the show and I spoke with Peggy Miller, Bret’s mother. She was a blessing in disguise as we talked and got to know one another. I met so many men in different stages of breast cancer treatment. I also met Peggy in person, Cheri Ambrose, founder of the Male Breast Cancer Coalition and several spouses and partners of survivors. This was the beginning for me to launch into the world of breast cancer advocacy and that’s when I started raising awareness of male breast cancer.

Soon after I saw an ad campaign on Facebook for what looked like an important learning opportunity and applied for the Department of Defense Congressionally Directed Medical Research Program. I met the doctors and scientists who actually participated in breast cancer research and connected, with so many female cancer survivors. I was paired with a female breast cancer advocate and survivor named Vicky Carr. She was so awesome and knowledgeable about the disease and took me under her wing as a mentor. Vicky told me about a program called Project LEAD that is sponsored by the National Breast Cancer Coalition. The program picks only 50 advocates each year to attend a one-week training program where doctors, scientists and advocates are brought in to teach the science behind breast cancer from the bottom to the top. I made several connections there and gave a male breast cancer talk to many of the ladies who were interested in my story. As a result, two articles were written and published about me by other advocates.

I have been honored to meet many fellow male breast cancer survivors and their families through organizations like the Male Breast Cancer Coalition, Breast Cancer Brothers.org and The Bret Miller 1T Foundation, and the Male Breast Cancer Global Aliance. I have had opportunities to participate in several events to raise awareness and will continue to advocate for awareness. I urge all men to have a conversation with their medical providers to help promote awareness and possibly save someone’s life.