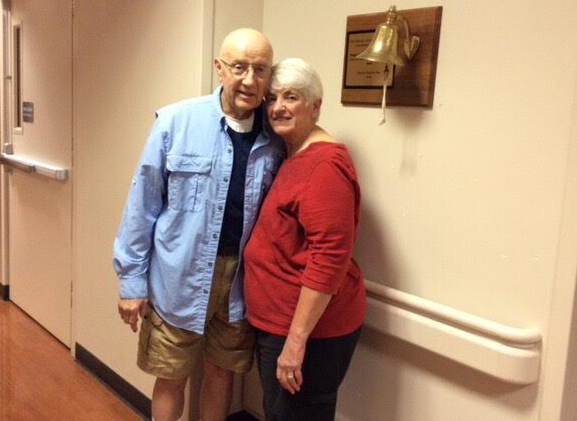 I spent my working years in the world of aviation and learned to fly in the Air Force.  After my five years in the service, I sold airplanes for Beech Aircraft for about 10 years and finished up my career flying for a company that had a contract to crew and maintain a fleet of aircraft for the Department of Energy in Albuquerque, New Mexico.

About five years ago I noticed a lump under my left nipple and went to my primary care doctor who sent me to a surgeon. As it happened, I also had a lipoma on the right side of my chest.  The surgeon sent me for a mammogram. Following the mammogram, she suggested removal of both. I showed up on the appointed day and she removed the lipoma but then said that she did not want to remove the lump under the nipple. She said that it wasn’t cancer (she must have decided that based on the mammogram) and she said that she did not think that my insurance would pay for it anyway. So, I went away without it being removed.

In December 2016, I noticed that the “lump” had gotten bigger, and that the nipple had begun to deform. By this time my wife and I had sold our home in Albuquerque,

New Mexico, and had moved into our motor home to travel the country. I had been diagnosed with CLL, a form of Leukemia in 2015.  It is a watch and wait type of program and we had decided to have it followed/treated at MD Anderson in Houston, Texas. We were in Colorado with our son, so I went to a local doctor who again sent me to a surgeon. This time I had not only a mammogram, but also a biopsy. I received a phone call from the surgeon in the first week of January 2017 with the positive cancer results. I was 71 years old, and felt shocked, although I was unsurprised. Since I was already invested in MD Anderson, we proceeded to make appointments with them, loaded the motor home, and moved to Houston.

My wife was angry at the doctor who refused to remove the lump initially, and afraid for me. Together we both decided that we would do whatever it took to fight back as hard as was possible to achieve a good outcome. Our children were shocked, as I had always been the sturdy, healthy parent – hardly ever sick and certainly not ever down for any extended period of time. They all responded in different ways, according to their personalities. Most friends/colleagues were supportive, but of course surprised. I was always the only male in the waiting room who was a patient.

I underwent a radical mastectomy along with the removal of 62 lymph nodes. This was followed by six months of chemotherapy; three months of Paclitaxel, which went pretty well, followed by three months of Adriamycin/Cytoxan (A/C). The A/C was much more difficult for me, and I was always extremely tired. The night after the infusion, I had night sweats and soaked the bed. About six days later, my temperature would increase, and I had a persistent cough. Between my third and fourth infusion, my wife Clara had to take me to the ER three times. I lost over 40 pounds throughout the entire chemo process. After the chemo, I received 30 sessions of radiation. I had genetic testing, and I was found to be negative for the BRCA genes.

Breast cancer changed my life forever.  I have lymphedema and other “side effects” from the treatment, but I am very happy to be alive and living a full life. My wife is my primary support, but our three children have also been very supportive. As have friends. That said, one of the down sides of moving to have treatment is that of being alone and without support. My last treatment was 20 November 2017, and I am working on being me again. I know that it will take time, but I will keep at it.

I’d like other men to know that the odds are against you ever having to deal with this disease. But don’t allow a doctor to put you off if you find something abnormal in your breast, just because you are a man.