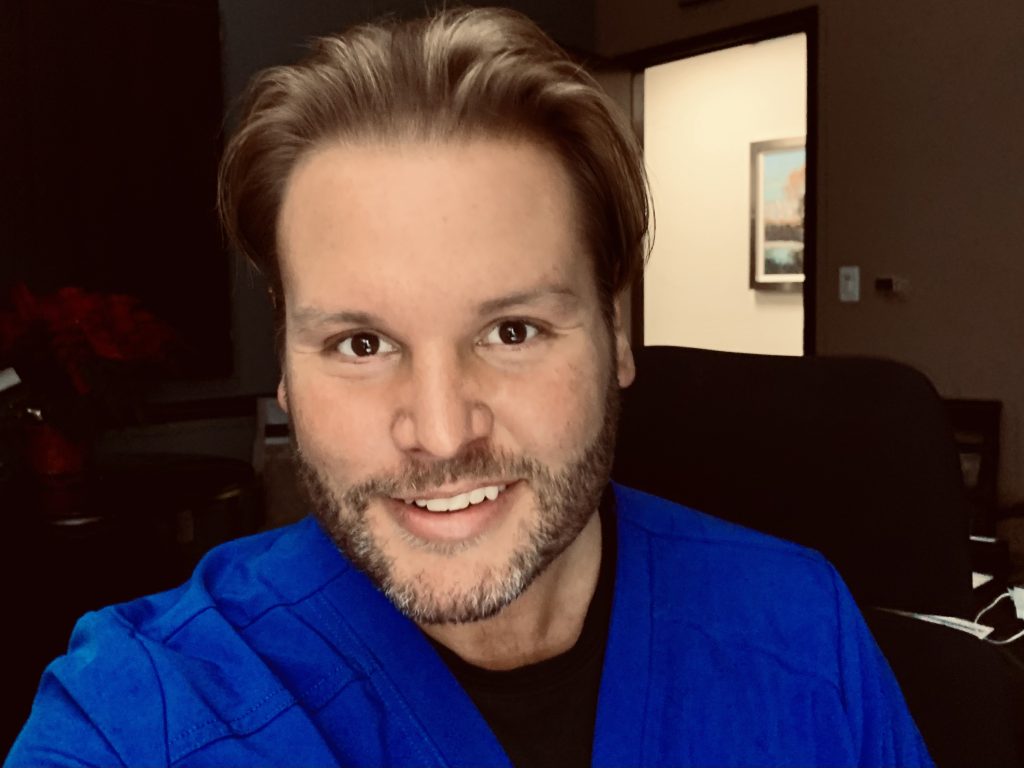 Kyle knew a lot about cancer. Now the Associate Chief Nursing Officer at Medical City Dallas, he has a critical care nursing background and has spent over a decade on the frontlines of cancer care. However, cancer doesn’t discriminate and even though Kyle knew about cancer so acutely, even he didn’t recognize his signs of breast cancer right away.

When Kyle was just 35, he noticed a sore on his right nipple which he initially thought was an abrasion. Several months went by and Kyle noticed that the sore never seemed to heal and the skin was beginning to deteriorate – often a sign of skin cancer.  Angry with himself for waiting as long as he did, Kyle embraced the realization that it may be skin cancer, so he made an appointment with his dermatologist who performed a biopsy, revealing what no one was expecting – breast cancer.

“I was shocked. I had prepared myself for skin cancer but because I was a male, and quite young, breast cancer hadn’t crossed my mind. But, I’m a nurse – I knew this! I knew men could get breast cancer, but we often go to the ‘bump or lump’ mentality; this was a great reminder that cancer can manifest itself in many ways,” said Kyle.

Six weeks after diagnosis, Kyle had a bilateral mastectomy and because the cancer had spread to his lymph nodes, he had chemotherapy and radiation as well.

“I’m sharing my story because I want everyone to be aware that this can happen to them. Be aware of changes in your body, even small ones, and if something seems off, get it checked. If I had caught it sooner, I may not have had to undergo chemotherapy and radiation. This has taught me such a lesson – now I don’t delay anything in my life!”

This experience is now the “why” behind Kyle’s commitment to quality care. His primary motivation as a nurse executive is the patient experience, and he wants every patient who passes through the doors at Medical City to have a compassionate, first-class experience.

“As much as I was always dedicated to that philosophy, having cancer really gave me another perspective. Now I can actually say, ‘Let me tell you what it was like to be on the other side,’ and why we prioritize a compassionate experience as a meaningful mission. When you’re on the other side, you’re scared, so every little thing that we can teach our healthcare teams about how they interact with the patient is so critical.”

Kyle is so dedicated to his work that he took just three weeks off for his double mastectomy and continued to work through chemotherapy and radiation, scheduling his chemotherapy on Thursday afternoons so he could recover over the weekend.

Kyle completed his treatment in early 2017 and is now infusing more balance in his life. He’s also took extra steps through physical therapy to increase his range of motion through his chest which was affected by the surgery.

“I’m also very happy to have my hair back! While I am so happy and thankful that I’m through treatment and hopeful that it won’t come back, it’ll be hard to get 100% past the self-image issues. It’s difficult to have those scars, and things just fit so differently – even suits!”

One silver lining of Kyle’s breast cancer journey is that he, and other family members, underwent genetic testing.

“I have a strong family history of cancer. One of my older sisters had breast cancer at age 24, which reoccurred 16 years later. My father also died of pancreatic cancer at the age of 58. Upon diagnosis, we decided to undergo genetic testing, which revealed the ATM genetic mutation that is correlated to breast and pancreatic cancer. Now, my family members will have a heightened awareness of their risk. My other sister moved forward last year with undergoing a prophylactic bilateral mastectomy, which was incredibly brave.”