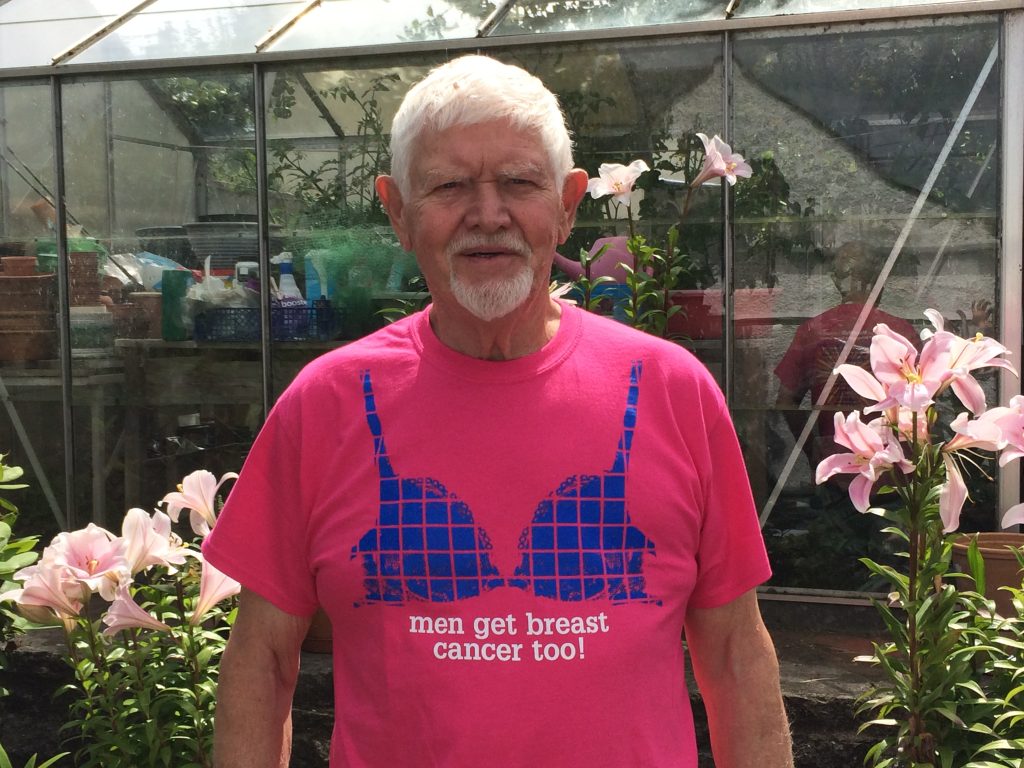 Back in the eighties, my wife, Patricia, found a tiny little lump on one of her breasts. Sensibly, she went to the doctor, was diagnosed with cancer, and had a single mastectomy to treat it.

In 2017, I developed breast cancer myself. Funnily enough, it was very obvious. I noticed one day that my left nipple didn’t look quite the same as my right nipple; it was slightly wonky in comparison. It looked as though the nipple was folded over, but it wasn’t really a bother; I was more concerned with a hernia that I had at the time.

When I was called in to have a pre-op for my hernia, I took my top off in front of the nurse who told me that I should get the nipple looked at. I went straight to the surgery and saw the next available doctor who wanted to refer me. Less than a week later I was having a mastectomy to remove my cancer. The cancer was stage two and the tumour was quite small. Since the operation I’ve had no need to go back for any other treatment, I simply take Tamoxifen; a tablet that I take once a day.

It didn’t surprise me that I had breast cancer…it just made me more curious. After my wife’s diagnosis, I’d done some reading on the subject so I knew something about it and that men could be affected.

What surprised me were people’s attitudes toward it. I’d had a conversation with a chap in the town centre one day who gave me the impression that he thought it was somehow un-masculine to have breast cancer. The other surprise is the number of young men that are amazed that men can have breast cancer.

It’s important that we talk about cancer because there’s a fear of the unknown; ‘breast cancer is something that women get, why should men be affected by it?’ There’s an attitude that ‘rugged men’ can’t be affected by it. I’m a pragmatic sort of guy, so if I’m ill, I will get it sorted out as it frees your mind.

Cancer is very unpleasant, it gives you a sense of your own mortality and there’s a fear that it might come back, but do not bury your head in the sand because talking about it might help someone.

I haven’t met any other men diagnosed with breast cancer since my own diagnosis.

Mark, s from Porthcawl, Wales, is working with UK breast cancer charity Walk the Walk on their Men Get Breast Cancer Too awareness campaign.