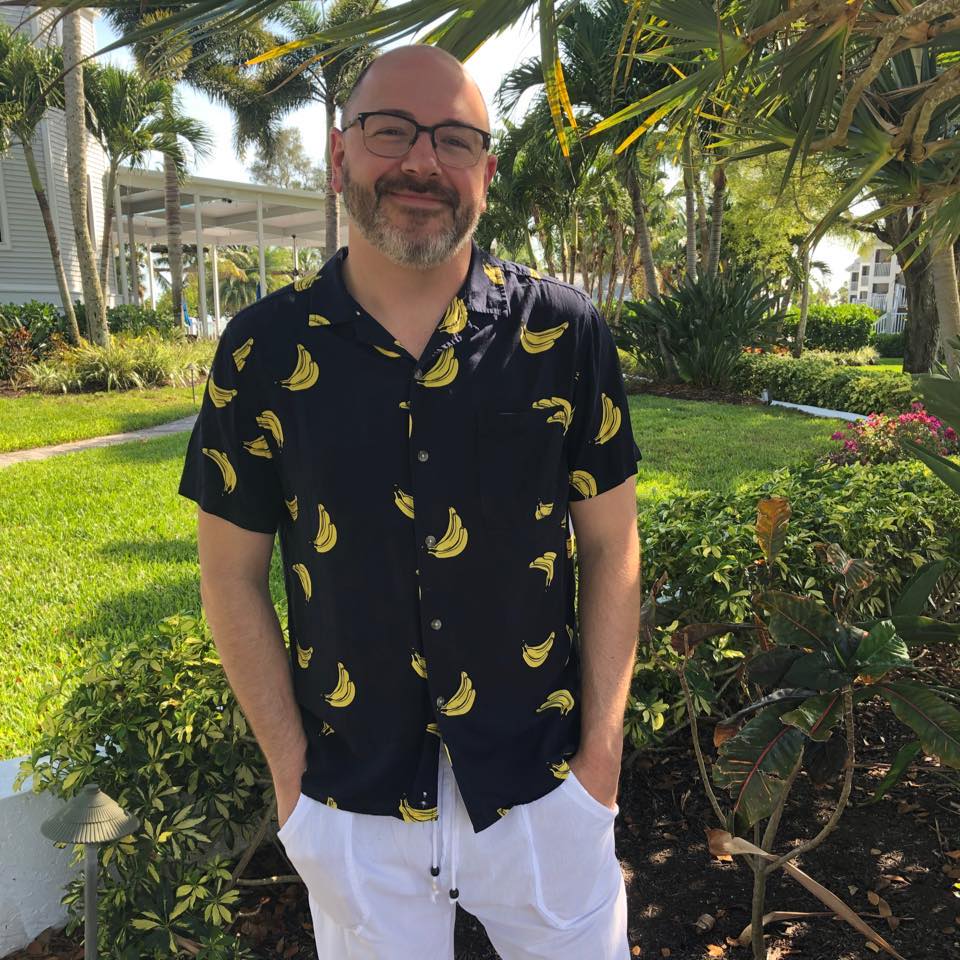 When I first discovered the lump in my chest, the “c” word floated around in my head, but that was not my first inclination. I had never heard of a man having breast cancer, but I guess I never really thought about it. I was thinking maybe I had a cyst, or some kind of tumor tissue. When my partner, Jason, pressed against my left nipple, there was a dark, watery discharge. I think we both knew at that point this could be more serious. I tried to resist, but I started looking up symptoms online like most people do. The “c” word, cancer, started popping up. I tried not to freak out, but it was hard to contain the thoughts.

I promptly went to my family doctor who diagnosed me with gynecomastia. He also sent me for a mammogram and ultrasound, and referred me to a surgeon to have a needle biopsy. This was not an intensive needle biopsy, as I would learn in the future. The mammogram and ultrasound yielded results which stumped the doctor, “odd results” was the phrase he used, which was not too helpful.

The first person I told in my family was my sister, as I needed to know if she was aware of any family history of breast cancer. There was no history she was aware of, however, my mom had dealt with skin cancer when I was younger. My sister was supportive and we decided to hold off on telling my mother until we knew more, as my mother would have not handled the news well.

A few days after my mammo and ultrasound, I had the small needle biopsy in the surgeon’s office. I waited about a week or two for the results. The small needle biopsy revealed non-cancerous cells, but it was recommended the lump be removed for further testing. I also had a larger needle biopsy and ultrasound of my right breast to determine if there were any additional concerns. Thankfully, all was good on the right side! I was also tested for the BRCA gene mutation, which thankfully ended up being negative.

At this point, only my partner and sister knew what was going on. After the lump was removed, I was still not ready to start telling friends and family what was going on until I knew more information. I was dealing with not being able to work out like I used to, as I had to let the area heal from where the lump was removed. The results came back as DCIS, which the doctors explained meant the cancer had not spread or became invasive. When I heard the possible recommendation of a mastectomy, my thoughts started swirling in all kinds of places. I was not really processing this and denial was setting in. I went through the typical “why me” questions as I am sure many experience when they find out something serious is going on with their health that is out of their control.

After a series of appointments with oncologists in Dayton, Ohio and after MD Anderson Cancer Center reviewed my case, it was determined the surgical markers were not great where the lump was removed and a mastectomy with a lymph node check was recommended. I was desperate to hear something different, so I decided to pursue a second opinion at the James Cancer Hospital in Columbus, Ohio.

My mind began going to the worst possible scenarios possible. I had body image issues as a teenager and this was bringing all of that up again. Here I was a 39-year-old guy, and I was reverting back to the fears and irrational thoughts of a teenager. What will people think when they see my scar? Can I handle going to a pool and dealing with the looks? How is this going to affect my sex life? So many questions and thoughts became my reality. I had days with tears, and days where I felt like I could get through it. I slowly started to tell a few friends and family, but I was not able to “come out” about what was going on with my health to everyone. Everyone I told was supportive, and most people were surprised that a guy was dealing with breast cancer. It had never crossed their minds a guy could get breast cancer, but now they knew it was possible. I strongly encourage all guys and girls who did not check themselves to start checking soon.

Now I had to face the reality of something that had been with me my whole life, and let’s be honest, had given me pleasure as well, was about to be removed from my body. I started telling more people because I could not keep it in any more. My mom was pretty much dumbfounded when I told her the news, but was supportive during the process. I began to wonder if there were other men who had been through this so I started doing an Internet search.

The results of the second opinion agreed with the Dayton recommendation. I had a left mastectomy and lymph node check in early July 2016. My lymph nodes were good, which was a great relief! I had two drains in my side for two weeks, which was definitely one of the most challenging parts of the physical healing. I had several follow up appointments close together after the surgery until the drains were out. The pros and cons of Tamoxifen were discussed and based on everything else, it was decided to hold off on the Tamoxifen.

Everyone I have talked to (family, friends, and members of the coalition) has helped me heal emotionally, mentally, and also physically. I have been lucky to have support and to ask questions and seek advice from many individuals. I didn’t think things could get better, but they are getting better. I am not a 100 percent there, but I am still working on it. This is a step of healing for me, as it gets me closer to being an advocate and not being afraid to let anyone and everyone know about my experiences. As each day goes by I am thankful for the moments I have with the people in my life, and for finding the support from this group. I encourage any male who is reading this to share their story, because I believe we can all heal and learn from each other, and in the end, that is what matters most-the shared human experiences we have in life.