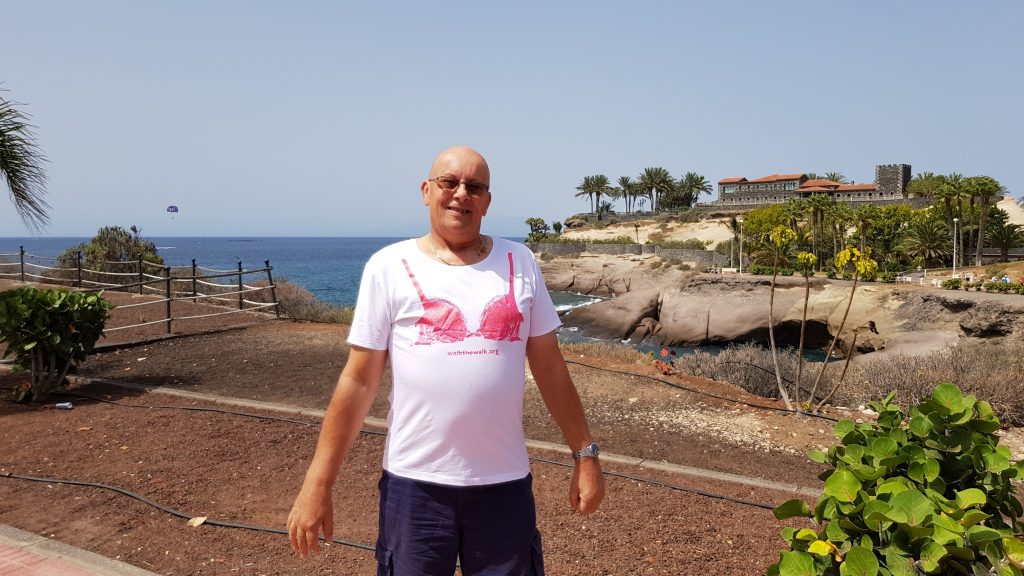 I am a Breast Cancer survivor!

My cancer was diagnosed 6 years ago, in October 2011, after my wife Teresa noticed my right nipple was inverted. I had stepped out of the shower and she saw a problem where I had not. Like a lot of men, I don’t spend time looking in the mirror and, as there was no pain to feel, I was blissfully unaware. Teresa sent me to the doctor who sent me for tests at the Conquest Hospital in Hastings, where they ran the gambit of scans, X-rays and a biopsy. The cancer had spread to the lymph nodes under my right arm, so these had to be dealt with as well as the tumor. A full mastectomy of the breast and removal of the lymph nodes followed, then 18 weeks of chemotherapy, and three weeks of radiotherapy.

The oncology department were fantastic and I have nothing but praise for the treatment I received. My wife Teresa is a registered nurse and was able to administer treatment at home, which saved the need for a district nurse to visit. This was a big bonus, in my opinion, and although she would have been feeling extremely emotional at the time, she remained professional and able to nurse me as she would have with any other patient. I owe her a huge amount. It could not have been easy for her as the cancer was extremely aggressive and there were no guarantees of a successful outcome.

My employer, Sussex Police, were very supportive and this also helped enormously as finance can be a huge worry. How other men who suffer with this illness survive when there are mortgages to pay, etcetera, I don’t know. I would have been so stressed out it would not have helped my recovery at all.

Six months after the operation I was able to return to work on light duties whilst attending radiotherapy appointments. That done, it was back to work full time. Shortly after I was diagnosed with lymphedema in the right arm. More of a nuisance really, there was slight swelling and the constant need to avoid infections. A holiday to Tenerife shortly after showed how important it was to avoid infection. I picked up said infection on my first day and spent the whole week in hospital on a intravenous drip which fortunately did the trick. The Spanish consultant toyed with the idea of removing the arm as the diagnosis was lymphangitis/cellulitis which was spreading rapidly down my right side. In some ways this was scarier than the cancer, since there was a foreign country and a language barrier to deal with. But, all ended happily and I am now very conscious of any cuts or grazes in that arm.

Since my experience, I am on a bit of a mission to raise the awareness of breast cancer in men as it is painfully obvious there are a lot of guys who are not aware. Early diagnosis is essential and may avoid the need for surgery and other treatment, just as with women. So, to that end, I have worked with numerous charities, BBC, ITV Television and radio; anything to get the message out there. Get to it before it gets to you is my motto.

I have been extremely fortunate to have survived this disease thanks in no small part to my wife’s care and the Conquest Hospital.

Finally, I talk to groups of people as part of my work as a PCSO in Sussex and I would welcome the opportunity to do the same for any group interested in learning more about male breast cancer.