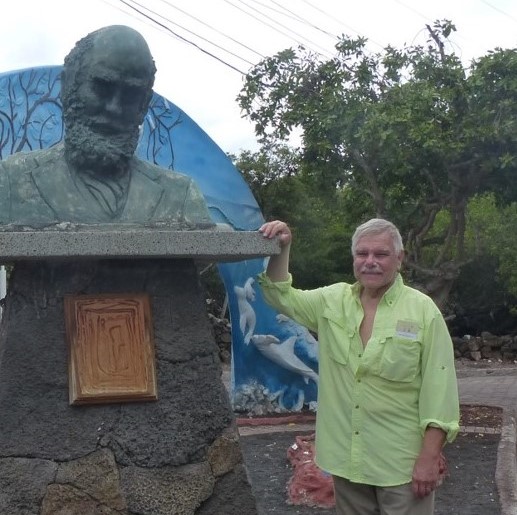 I have been abducted by male breast cancer. Yes, I refuse to call this a “journey”. That is something you choose and look forward to doing. Nothing about this fits either of those criteria. I am the “lucky” one-out-of-2,400 expected cases of male breast cancer annually in the US, and it sucks!

It took me a long time to accept those words, but six years past diagnosis I’m still shouting from the rooftops that, “Breast cancer is an equal opportunity disease”!

I was diagnosed at age 69. Over several months previous I noticed two lumps in my right breast which I assumed were fatty deposits. I ignored them, like most men, until they started to ache. I asked my wife to look at them. She said it felt unusual to her so, on May 3, 2016, my family doctor ordered a mammogram for May 10. Though the “squeeze” wasn’t as uncomfortable as I’d anticipated, the radiologist suggestion that I have a sonogram was. Two anxious hours later, the sonogram technician finally did her thing.

A half hour after that, I saw the Doc. who suggested a core biopsy, which he performed an hour later. Thus, after a mere five hours, I returned home to a justifiably concerned wife

I waited another agonizing six days for my GP to call with the diagnosis, of Invasive Ductal Breast Cancer Stage 2B.  Shock! Disbelief! Fear! Anger!  This does not happen to men. This cannot happen to me!

Fortunately, I live near Buffalo, NY, home to the Roswell Park Cancer Institute, a world-class research and treatment center. There I met my surgeon, Dr. Helen Cappuccino, who suggested a complete mastectomy of the right breast.

So, on May 31 (2 days after our 24th wedding anniversary) I was wheeled out of surgery no longer bilaterally symmetrical.  On June 13, Dr. Cappuccino called with the lovely news that my cancer had jumped the sentinel nodes. Three downstream nodes were affected, one of them breached.

June 21 and I was back in the OR for a complete lymphadenectomy of the right axilla and arm.  While healing from that, I developed lymphedema. Two surgeries in less than two months, and a swollen arm to boot!

Given that both tumors were high-risk, that the surgical margins were not clear and that a lymph node was compromised, my oncologist, Dr. Ellis Levine, recommended chemo followed by radiation. He at first recommended Taxotere which can cause peripheral neuropathy. As a violinist this risk was an unacceptable. I asked if there were other options, as I’d rather be playing my fiddle for as long as I can. He agreed and decided on an older protocol of Cytoxan/methotextrate/4-flurouracil every 3 weeks for 8 sessions. That followed by daily radiation for 8 weeks.

I tolerated chemo pretty well with little nausea, though the dreaded constipation was very much present. My hair thinned considerably, but at least I kept it and I didn’t lose my sense of taste, though I did experience some minor “metal-mouth”.

I was initially more effected by the steroids that accompany chemo. They disrupted my sleep and energized me to a point of mania. That’s when I rearranged the garage and bought a convertible!

Eventually fatigue settled in and it was then that Chemo-Brain came a-knockin’. I lived for two weeks in a dizzying slow-motion fog that was worrying enough for my doc to order a brain MRI. Well contrary to common belief, I do have one, a brain that is.

Radiation was a different story. After 40 days of hell my breast area was red, sore and itchy. I doused myself with moisturizer and was stained purple with gentian violet. All these treatments, worked, and I was put on a lifetime Rx of Tamoxifen.

Fast forward 2 years, and the Tamoxifen worked…until it didn’t! I was then presented with the gift of two more lumps near the right clavicle!!!! And this a week before our 25th anniversary trip to the Galapagos Islands. Dr. Levine said to go anyway. We did, and had a great time, but the question, “Is it is or is, or is it ain’t?” was always in the background!

Upon returning, I saw Dr. Levine, who was visibly stunned when he told me they were cancerous. Welcome to stage IV. Bye, bye, Tamoxifen and hello to my new buddies Ibrance, Leupron, and Letrozole, along with bone and CT scans every 3 months. As of this time, July, 2022, the little beasties are in check, and I’m hoping they are the dumbest cancer cells ever!. Unlike many on this regimen, I’m experiencing only minor side effects, fatigue, dizziness and occasional brain fog.

All during this time I emailed an extensive list of friends and relatives who provided unlimited encouragement and support. I connected with another man who was a 14-year survivor, and eventually, with the very editor of these stories. I armed myself with research and found this online community of men, survivors who are willing to share their stories, and providing comfort and inspiration. Yet, without my wife, I could not have gone through this process well at all. She was my nurse, driver, secretary, “memo pad”, but mostly my best friend, confidant and lover. A strong support network is essential in this battle.

I’ve been told that my prospects for long-term survival are good. The search for an immunotherapy continues, and with any luck, I’ll out-survive its availability. But we survivors either die with cancer or because of it. All I can do is appreciate and be grateful for all that I have, focus on the good in this particular moment, and let tomorrow fend for itself.  It isn’t easy, but at age 75 I’m still walking parallel to gravity and on the green side of the grass. Where there is hope, there is no fear.  I prefer to live in hope.