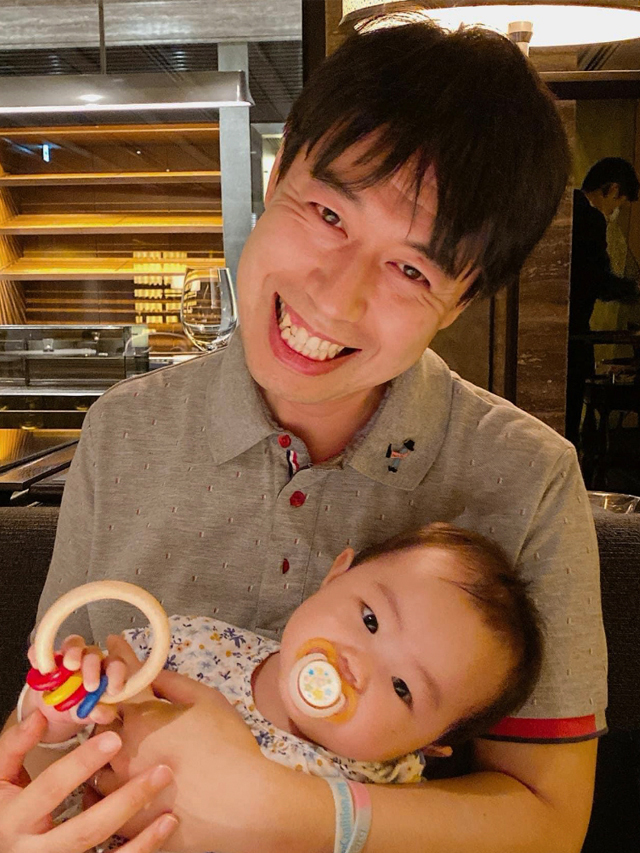 It was in 2015 when I first noticed my left nipple was inverted as my wife pointed out it was dented and looked like the flat end of a minus screw. She laughed and said it would get normal again if I exercised and lost fat. Then in the summer of 2016, I started to feel pain beneath the left nipple and also felt a lump there.

Being a freelance writer for a local newspaper, I interview many doctors and write feature articles throughout the year to raise public awareness of different types of diseases, including cancer. I had recently written a report on professional insights about breast cancer in which I interviewed Dr. Futamura, my surgeon and a breast oncologist at Gifu University Hospital in Gifu, Japan. After our interview in October 2016, I told him about my symptoms, sharp pain in the nipple and a lump underneath it, by chance. But he said it could be friction with shirt, which is a complaint often claimed by men and that I shouldn’t worry too much because male breast cancer is very rare. I was, after all, only 42 years old.

Late in that same month, after the article came out on the paper, I sent him a thank you note by e-mail. My lump and pain hadn’t disappeared yet, so again I asked him if I should get checked up. He said I could come see him “just in case” and that’s what I did in December.

My clinical visit started with a casual conversation with Dr. Futamura. We talked about how successful our article was, but once he sat down and saw my left breast, I noticed his face turned grim. As a medical professional, he wouldn’t say anything uncertain until any further exam was done, but because we worked as a team on the paper, there was this sense of solidarity between us. I knew there was something he wouldn’t tell me at that point. So I said, “So, what stage could it be?” He didn’t look surprised and silently put up his index finger meaning stage 1.

Strangely, I wasn’t shocked but, rather, I was just grateful how lucky I was to have the best doctor I could ever have, the one I can fully trust. The next appointment was two weeks later. My wife Miho accompanied me, and this time I had a mammogram, an ultrasound, and a biopsy. I’m pretty chubby in my chest area, so the mammogram was a no brainer. When I went back to his office and saw my results displayed on the screen, I knew it was a malignant tumor. The section image of my breast had a white spot the size of an acorn stretching from right beneath my left nipple. It was just like the images the doctor had shown me as examples he uses to explain how he diagnosed cancer patients during our interview back in October.

Dr. Futamura explained that a mastectomy is usually the first option in men because we aren’t bothered as much as women are to lose our nipples. However, Miho was very shocked and asked him what the scar would look like. I was glad it was me, not her, to go through all this. It must be way more devastating for any woman to lose her breast. I was also concerned about cancer cells possibly spreading to other parts of my body.

The doctor booked my next appointment for PET-CT test and also my surgery date right away without waiting for the biopsy result. On the next visit my PET-CT result came back negative which was a big relief for us. I had a mastectomy and an axillary lymph node dissection on 1 February, 2017.  Everything happened super fast after my first visit thanks to my doctor’s support to expedite my treatment plan. Along with my breast tissue, my nipple and two sentinel lymph nodes, “the gate keepers” were removed. During the operation the result came back and both of them were positive, so they removed all my lymph nodes under my armpit. Because of this, my cancer was reclassified as stage 2a.

I stayed at the hospital for 11 days in total. They wouldn’t let me go until my daily drain content decreased to under 20ml. When I read patients overseas are sent home the next day or sometimes on the same day, I can’t believe it. My wounds from the surgery and the drain were hurting bad and I was running a high fever.

Genetic testing is not very common yet in Japan, so I didn’t take a test.  However, I was briefed by a specialist on the option prior to my surgery.

One out of every two individuals develops cancer in Japan, but I always thought it wasn’t my thing, until I was diagnosed.

Miho was very shocked at first especially because she had lost her father to cancer. The idea of losing me must have been terrifying for her. She held herself strong and did lots of research on how to eat and live healthy and supported me through my journey. She later told me she was so worried when my surgery took about an hour-and-a-half longer than scheduled. I remember her teary eyes when I came back to my bedroom in the hospital. My dad and sister know about my breast cancer, but my mom, who is at a nursing home, and my grandma, 95, don’t. I just don’t think they need to.

My colleagues were also shocked because I’m still relatively young. Plus, they didn’t know men can get breast cancer. At first I wasn’t going to tell anybody my news, but one of my friends posted on Facebook on the day before my mastectomy that he was battling tongue cancer. I was inspired by his brave confession and decided I should encourage people to pay attention to their health. In return I got so many “Likes” and heartfelt messages.

It was truly a life-changing experience to me and made me realize death is not other people’s business. Our life could end at any point. And now that my life is back to normal, I strongly believe something divine keeps us alive and there’s a reason for it. The world looks different, the way I perceive things is different, and I see my life with a whole new perspective. Nature is especially more beautiful than it has ever been to me. I think I’m more compassionate and patient than before.

I’m on a three month sick leave granted by the college I work for. My monthly salary is fully secured during the entire period. Also, Japan’s universal health insurance system has high-cost medical expense benefits anyone under age 70 can apply for. Our monthly payment at the cashier’s desk will be no more than a specified amount according to our income. Thanks to this system, I only had to pay about one-tenth of the entire cost. My final treatment is to be a daily 20mg Tamoxifen tablet.

I want everyone to know men could have breast cancer too. In Japan, there are 600 new male patients every year. I especially want other men whose mothers have been diagnosed with breast cancer to get checked up. I also encourage anybody who feels chest pain, nipple discharge, or a lump to go straight to a breast oncologist. I don’t have any family history of cancer, but here I am. It could happen to anybody. I know it’s embarrassing to be the only man in the waiting room and the receptionist will ask you if you are with your wife, but don’t feel ashamed about your disease, you are just there for treatment.

I was so lucky to have my cancer detected at an early stage and have it removed. Thanks to my occupation, my knowledge, and the best team of medical professionals, I am a survivor. I can’t thank Dr. Futamura enough for having supported me and given me the courage to overcome my fear and fight this disease. When I woke up from anesthesia and he said to me “It was a success,” I couldn’t believe I was still alive!

Now I’m on a mission to spread the word that breast cancer should be a concern for men too, and they should seek timely and appropriate treatment if, by chance, they are found to have the disease.