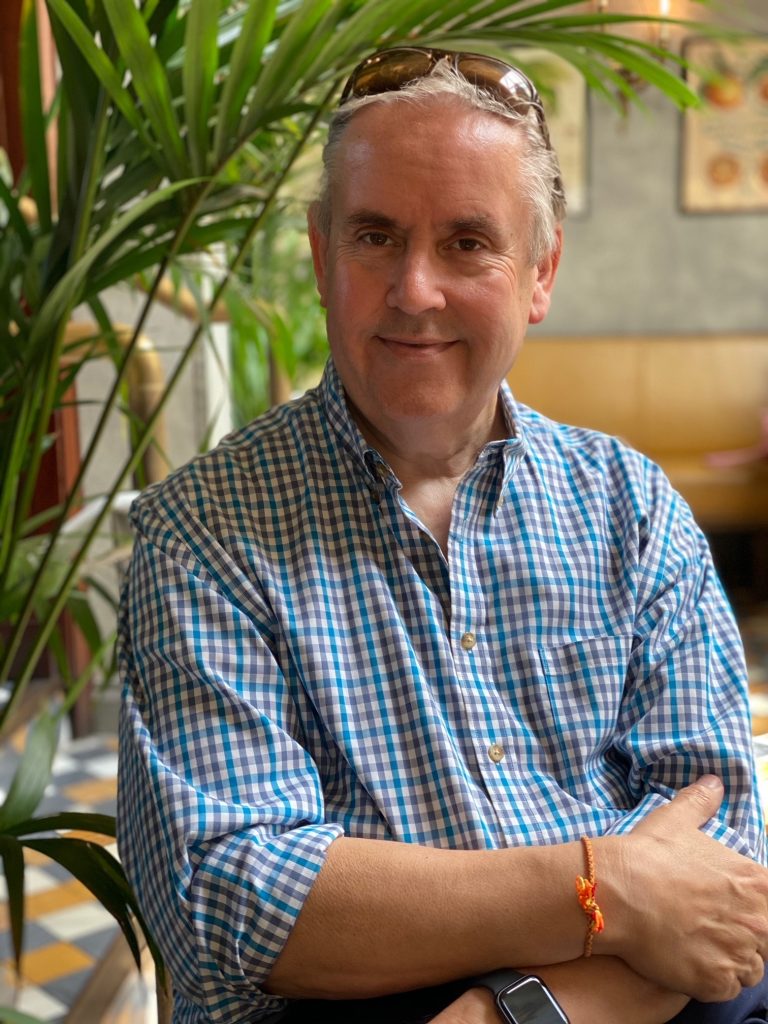 I found a lump in my chest on 22nd August – my birthday. I was on holiday in Florida and was in the shower when I felt the lump, which was on the right side, between my nipple and armpit. It wasn’t sore, and I just thought it was a boil. I wasn’t feeling tired or unwell – life just seemed normal. I didn’t tell anyone about the lump – not even my partner.

I’d had a lump 15 years earlier on the other side of my chest, which was a fatty deposit. At the time, I remember reading about breast cancer in men.

My brother died from Leukaemia when he was just three years old, so my mother always drummed into me the importance of checking my body. I wasn’t aware that men should check their breasts, but I was acutely aware that if your body changes, you shouldn’t leave it.

I have lost close friends to cancer as they ignored signs that things weren’t right.  My mother died from ovarian cancer when she was 68 years old, and I knew there was a link between ovarian and breast cancer.

On returning from holiday, I went to see my GP, who checked the area and said it was quite common for men to get fatty deposits, but she referred me to a specialist consultant to make doubly sure it wasn’t anything to worry about. It was at this point that I told my partner about the lump.

I had private healthcare, so I didn’t use a breast clinic, instead I saw a consultant at a private hospital who is well-known in Bristol for treating breast cancer patients. I remember as soon as the consultant did the ultrasound his face changed. I could see the scan myself and could tell it didn’t look good. The consultant took a biopsy there and then, and it went straight to the lab as a matter of urgency. When I got home, I started googling images of breast cancer and I just knew that’s what I had.

A week later, I was diagnosed with hormone receptive breast cancer. The tumour was the size of a golf ball. I think the reason I hadn’t come across it earlier was because I am a big man and the lump wasn’t hard.  I wasn’t shocked to hear I had cancer, as it didn’t come as a surprise, but my first instinct was ‘how long have I got? Is it going to kill me?’  I defy anybody who receives a cancer diagnosis not to be a bit scared.

Telling my children about the cancer was tough, but they are all grown up and were very supportive. I was determined not to let my diagnosis get me down. The first thing I did when I got home was register for a 26 mile walk to raise money for Breast Cancer research!

I had a mastectomy and during the surgery they also removed all my lymph nodes from under my right arm. This was followed by 6 sessions of chemotherapy and 20 sessions of radiotherapy. I was lucky enough to have my chemo sessions at home, because of my private healthcare, and the Oncology department at the hospital where I had the radiotherapy, was only a 10-minute drive away. I had my hair shaved off the week before my chemotherapy sessions started as it meant I was in control.

I’ve not felt embarrassed about the physical changes to my body –  I am happy to take my t-shirt off on the beach and I can’t say I’ve noticed anyone looking at my scar.

I remember initially I asked my surgeon whether he could save my nipple but when he explained the risks in doing so, I realised it was better just to lose it. I personally believe it’s easier for a man to lose a breast as, for me, it’s not linked to how I “feel” about my body.

Having cancer was a positive experience in many ways, as it made me take a good look at my life and reassess things. I have never felt less of a man in a way that I believe some men have once their diagnosis was confirmed. Right from the start, I decided to face it head on and that worked for me.

I feel in good health now and continue to take Tamoxifen – which has had interesting side effects. I am so much calmer now, and I take things in my stride. I was talking to my consultant, and he commented that the Tamoxifen could be interacting with the testosterone, lessening the hormone that makes men aggressive. There seems to be a lack of research into the impact of Tamoxifen on male breast cancer patients. It is obviously mainly prescribed to women, and I am told that it reduces the chance of the cancer returning from 30% to 8% but there seems to be no hard evidence for men.

I went to a group counselling session at the Penny Brohn Centre in Bristol. It was a good experience, but in hindsight I should maybe have sought further support. I’m quite happy to talk to complete strangers about my breast cancer experience if the topic comes up in conversation. I can honestly say that I never, ever had anyone make a negative comment about my breast cancer or even been teased about it. That’s saying something as I work in quite a male dominated environment, where it’s common to make jokes, but I have had nothing but support all the way. I’m a former police officer who now runs an IT company.

My friends were extremely supportive throughout my treatment. We all chatted openly, and it really helped me to deal with it. I would be lying if I said I didn’t have moments when I felt low, but I just went onto Facebook and spoke about it…hopefully it helped others going through the same thing as me.

I did a presentation about male breast cancer to 2,500 of my former colleagues in the Police Federation. It was great to shine a light on the disease and the importance of men checking their chest area. I still believe that there is not enough awareness though. When I listen to radio programmes about breast cancer, they usually don’t even mention that men can get it. If it is a call-in show I try to get through and make sure I get the message out there. My message is still…if in doubt, get it checked!

7 years on from my diagnosis I am still ‘cancer free’ and actively work with charities involved with Breast Cancer to this day.