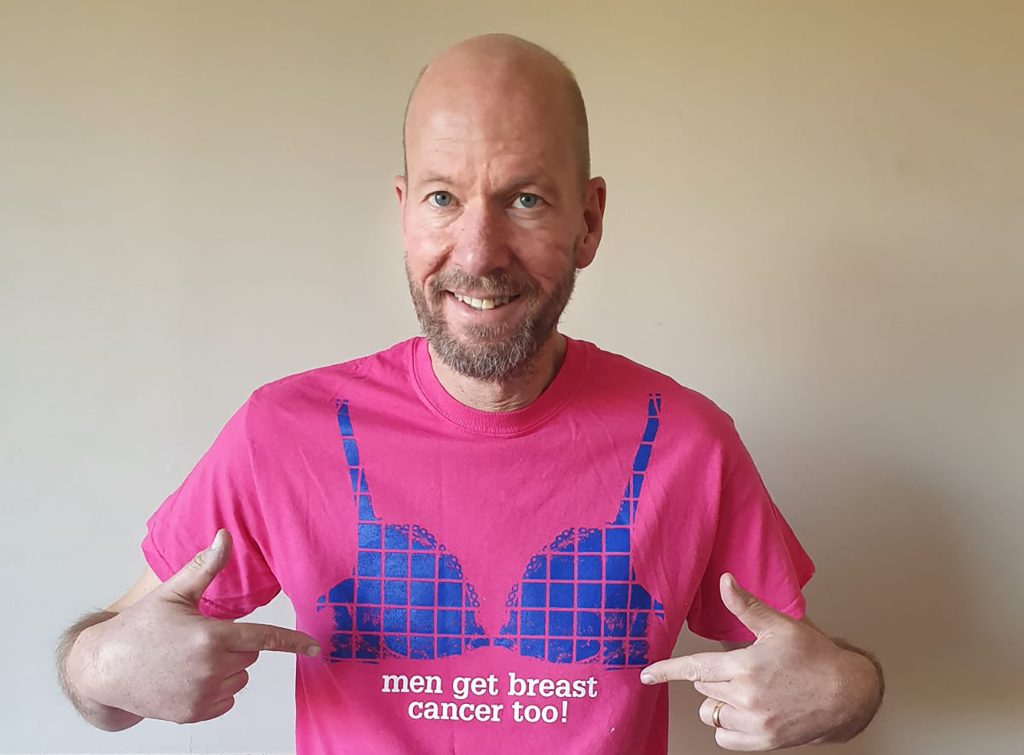 “I noticed a lump in my right breast when I was showering. I was not checking myself, in fact, like many people, I didn’t even know men were supposed to check their chest area. Saying that, I was not naive enough to think men couldn’t get breast cancer, but it wasn’t something you heard about.

I was a bit alarmed when I discovered the lump, but my mother had breast cancer some years ago, so I had an appreciation of the disease.

I made an appointment with my GP straight away where I explained that my mum had been treated for breast cancer. My GP checked the lump and the area around it, and I was referred to the breast clinic. Throughout everything, my GP has been great.

A short time later, I was in the breast clinic waiting for my appointment. It was a little strange going in there for the first time as there are obviously far more women than men, but I had the support of my wife, so I was fine. All the information at the centre was geared towards women – I guess this is because the disease affects so many more women. The consultant I saw had a prod around the lump area, told me it was fatty tissue and that there was nothing to worry about, and sent me on my way.

I carried on as normal, until about 12-14 months later, when I noticed the lump was getting bigger, the nipple became inverted, and I started to get discharge from it. It also became painful to touch, even if someone just brushed past it.

I went back to my GP who quickly referred me back to the breast clinic. Within 10 minutes of my breast clinic appointment I was going for a biopsy and a mammogram, and I was told it was likely to be breast cancer.

A week later, I received my diagnosis – I had breast cancer. It was very surreal and a bit of a whirlwind. I remember my wife was quite angry – she felt something should have been done much sooner. I think I just felt relieved at being told the cancer was treatable.

I had a mastectomy and the surgeon also removed some lymph nodes from under my arm. Everyone involved, from the nurses to the surgeon, treated me so well. I think there was a bit of intrigue as it was unusual to have a man being treated for breast cancer.

The following month, I started chemotherapy. I had six sessions of chemo (one every three weeks), followed by three weeks of radiotherapy.

It didn’t bother me, losing my hair as a result of the chemo – the scar from my mastectomy bothers me more. I used to like taking my top off, but I’m much more self-conscious of this now (even though I am slimmer than ever before.) I wouldn’t take my top off at the beach in the UK, but I will abroad as I’m less likely to know anybody – although it is noticeable that you still get glances from people around you. In a sporting environment, I would remove my top, but would try to minimise the possibility of someone seeing me.

As a result of having my lymph nodes removed, I developed lymphedema and now have to wear a compression sleeve on my arm 24/7. My sleeve has become a part of me and, if I choose to, it
allows me to tell people about my experiences when they ask what is wrong with my arm.

I had five years of annual mammograms and I will continue taking Tamoxifen until I am ten years clear. I was tested for the BRCA gene because of the history of breast cancer in my family, thankfully, this came back as negative.

I have three children – two sons and a daughter. At the time of my diagnosis, my sons were 23 and 21-years-old, and my daughter was 19. My daughter took it the hardest, she was very sensitive, and her college work was affected. On a positive, my mother made a full recovery from her breast cancer, and that helped my children.

Just after my diagnosis, when I was sitting in the car, reality hit me. I didn’t allow this to last long though, as I knew I needed a positive attitude to beat this disease. I still had dark days, especially during chemotherapy, but I just had to get through it, one day at a time.

My breast cancer diagnosis definitely affected my wife more than me. If I didn’t want to eat, I wouldn’t. If I wasn’t feeling up to doing anything, I would take myself off to bed. This was hard for my wife – she wanted to see me get stronger by eating or by trying to move. She also had the pressure of looking after our three children’s health and wellbeing.

In terms of support, I visited the local Maggie’s centre a couple of times, but I had a brilliant support network around me in my colleagues at TATA Steel who were all fantastic! Maybe if I had the opportunity I would you use services available to support me with the psychological effects of my diagnosis and treatment. I often think that I should have taken the opportunity to sit down and have some counselling at the time and sometimes even now when I am feeling a little low. Psychologically, the worry of a re-occurrence never really goes away.

I would encourage all men to check themselves regularly and if they have any concern at all, they should go to see their GP. People shouldn’t be afraid to visit their GP – there is no such thing as a wasted appointment, it could potentially save their life.

I hadn’t met any other men diagnosed with breast cancer until I became involved with Walk the Walk’s Men Get Breast Cancer Too! campaign. Being able to talk to other men was very beneficial and being part of the charity has helped with the feeling of giving something back.