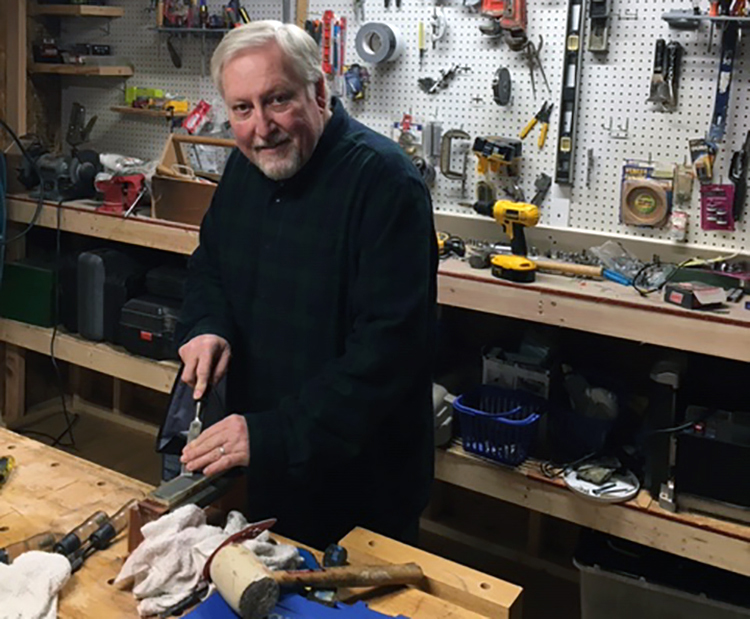 It was Sunday night, October 7, 2018 approximately 6:00 pm. working on my front porch that had been an all-day event and finally at the end of project. It was time to put the finishing touches on my newly stained bead board ceiling and hang the beach swing. At the very end of the project is when my painter’s stool flipped with me trying to hang the beach swing. Then gravity took over all 225 pounds.

My wife and I had purchased a fixer-upper home back in March 2018 with the intent to do as much of the renovations as possible. We have completed 90% of the interior work, and now, we are living in our new home. The exterior painting was the next phase of our never-ending list of projects.

I’m a commercial general contractor and have the resources to complete most of the renovation work for our fixer upper.

All projects and golf were put on hold that Sunday night. Because of the gravitational effects, I broke five ribs, damaged my rotator cuff and punctured my left lung.

While in the hospital the MRI revealed a lump under my left breast. Five days later I left the hospital with an appointment (primary doctor) aimed at finding out more about the lump.

After a mammogram, ultrasound and a needle biopsy Stage 2A Invasive Ductal Carcinoma breast cancer, HER-2/neu, Negative (1+3) was confirmed.

Appointments were immediately made with my surgeon, and everything was just a blur. My wife was my rock and escorted me to every appointment and helped me organize what is becoming my new life.

My broken ribs were healing, and the pain was still there. However, the breast cancer was at the top of the “to do list.” Eight weeks later, after the fall, on Thursday, November 29, 2018, I had a complete mastectomy of my left breast and the removal of two lymph nodes under my left arm. The pathology reports found no cancer spreading to my lymph nodes or anywhere else in my body. My family and I needed positive news. Falling off the painter stool saved my life.

On December 26, 2018, my oncologist scheduled chemotherapy to start in January 2019 and will include four treatments, one every 3 weeks. My breast cancer journey is just in the beginning stages.

I have met so many people that are dedicated breast cancer professionals and believe I have the best team supporting me. Not to mention finding the Male Breast Cancer Global Alliance.

My family and friends have been very supportive as well as my colleagues. To my amazement, there are many stories out there of men with breast cancer but only told as a memory without action or advice.

I too needed to be reminded of a friend who died of cancer several years ago and that it is was breast cancer and not just “cancer.” A much bigger connection is made when one says, “breast cancer in men.”

I have often said to everyone in my family, that when I retire, I want to grow a ponytail and beard, buy several tie-dyed shirts, one good pair of sandals and spend lots of time walking up and down the beach with hope that people would look at me and wonder “what’s his story”, or even better, just stop and talk and make friendly conversation.

As far as my life story goes, it seems to be getting a little more interesting the closer I get to that retirement day, but let’s be clear, tied dyed shirts and sandals are a must. We will see about the ponytail and beard after chemo.

It’s been four years form the date I was told I had breast cancer. The first seven months included surgery / mastectomy of my left breast, four rounds of chemo starting January 9, 2019, and finally being told I was cancer free in May of 2019.

I don’t want to minimize how brutal chemo was while dealing with 5 broken ribs and sleeping in a recliner for many months. Those days were not easy. I did lose all of my hair and a few toenails.

My wife was a gift from God as my primary care giver. She kept things normal or at least as close to normal as possible.

After all the chemo was completed and ribs healed my life changed completely from what it was before.

Is my life better, more fulfilling or just plain different?

Through my eyes as a breast cancer survivor my life is amazing. Beyond anything I could have imagined. My caregiver wife, support groups, friends and family have given so much love and hope. I owe so much to them for helping me get to where I am today.

My post cancer life is filled with so many friends who get up every day with one major goal. Beating this awful disease.

FYI – I do have a ponytail that I call “My Chemo Tail”. The ponytail helps start a lot of conversions about breast cancer in men.