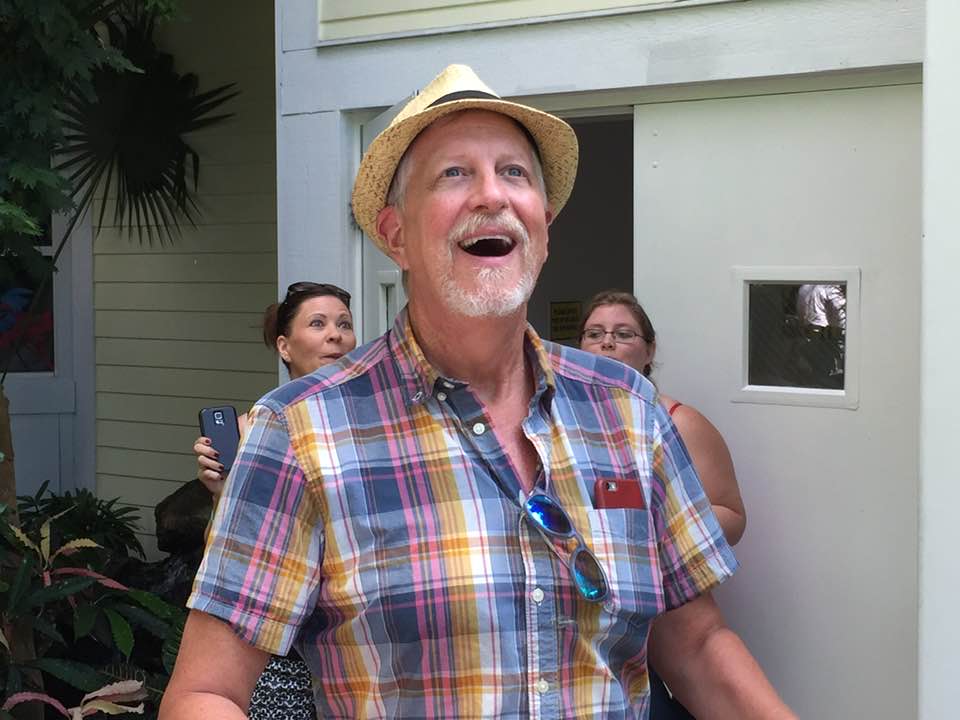 I am a professional actor, director and professor at Oberlin College, where I chaired the Department of Theater for seven years, and where I will continue to teach until my retirement in 2025. I am proudly gay and am privileged to be legally married to my partner of 31 years, David. I am also a member of a very special fraternity: men who are surviving breast cancer.

My cancer journey began in November, 2016 when my family doctor recommended I have a mammogram to check out a suspicious lump in my left breast. “Breast cancer is extremely rare in men, so my best guess is this is just a calcified duct…but let’s be safe,” she assured me. On December 4, 2016 I had the procedure and, after a good bit of cajoling and lots of jokes with the tech about how she wasn’t used to such a tall patient and that “men don’t have much tissue!,” I was told to put my shirt back on and hold tight while the radiologist took a look. Ten minutes later the tech came back in and said, “he’d like to do an ultrasound to check out an abnormality.” So, ultrasound. Wait another ten minutes. The radiologist himself walked in the door looking nonplussed. “I am not the doctor who makes the call, but I am almost certain this is cancer we’re looking at. We need to refer you to a surgeon for a biopsy.”

As unexpected and shocking as these words were, I wasn’t particularly moved by them. It just all seemed a bit surreal. And, fortunately for me, things moved at lighting speed. I had a consultation with a surgeon that very afternoon and the next day I was back in the pink walls of the Women’s Health Center at my local hospital for a needle biopsy. In what seems like extremely unusual protocol, I was ushered back to the waiting room immediately after the needle extraction and my surgeon told me to relax and she would come back with the results in a few minutes. Good to her word, she met me in an examination room in less than twenty minutes and confirmed that, yes, I had breast cancer, and that, good news, it was a small tumor and an early detection, so things looked positive.

I had a full mastectomy of my left breast on January 4, 2017, including the extraction of sentinel nodes. Everything looked good, under the circumstances, with no involvement of lymph nodes, clean margins, and a tumor less than 3 cm in size. In the follow-up, I thanked the surgeon and inquired whether I would be in the clear to make the trip to Washington, D.C. later that month to attend the Women’s March, which I felt deeply compelled to participate in. She looked a bit surprised and told me that if I felt that strongly about it, I should definitely make plans to go, but that I might still have some drainage issues at the surgical site, but it would be manageable.

Pathology came back with the news that the tumor was ER and PR positive, HER2 negative, with a cell grade of 3. I was referred to an oncologist, had an initial consultation and then made my way to D.C. where I was sequestered in a nice hotel room during the inauguration and throughout the weekend of demonstrations. I met a group of close women friends there and we marched. I carried a big sign proclaiming my status as a “Male Survivor of Breast Cancer, Standing in Solidarity With Women’s Health!” It was grueling and uplifting. By the end of the day, my chest was so swollen, distended and deep purple with a hematoma at the surgical site that I thought I might have done serious damage. Once I was safely home, my surgeon recommended another quick procedure to clear the collected blood and I was sent on my way to heal for the month of February.

Though my initial prognosis was very positive, in an “abundance of caution,” and because of the cell grade, my oncologist recommended chemotherapy. I began in March and received four rounds of very aggressive treatment, in three-week intervals. To this day I hold that I never felt sick from cancer, but the treatment nearly killed me. Chemo is not easy. It is extremely hard on the body, because it’s killing any and all rapidly growing cells, whether related to cancer, or not. I lost my hair. That ship has sailed, never to return. So, I learned to sport a chrome dome. There are ways to cope. And I did. I finished chemo in May of 2017 and had a wonderful vacation with my husband that June. The oncologist recommended hormone therapy and I began treatment with Anastrozole, an aromatase inhibitor typically used in the treatment of post-menopausal women. My oncologist suggested that this “maintenance” regimen would last for five years. I had regular check-ins with oncology, first every three months and then every six. All was going well. Until….

March of 2021 I had my first Pfizer vaccine for Covid. I was interested by a few articles I was reading regarding how many women were being advised to hold off mammograms, etc., because the vaccine was causing swollen lymph nodes that could be misinterpreted. I thought little of it, because I practiced self-examination and was fully examined by my oncologist every few months. Plus, I was continuing to get annual mammograms of my remaining breast. Out of curiosity, though, I poked around in my armpits and, bingo, found a very large swollen lymph node under my left arm. Even though it was the arm opposite the site of my vaccine, I attributed it to a reaction to the shot. I went ahead with the second vaccine and waited for the swelling to go away. It didn’t.

In late May I saw my family doctor. She examined the swollen lymph node and sent me for an ultrasound with a new surgeon (my previous surgeon retired shortly after my mastectomy). Ultrasound. Wait. Consult, suspicious biopsy. Wait. Dx: recurrence of breast cancer with the exact same attributes as the original. CT scan. Bone scan. PET scan. Wait. Dx: regional recurrence with no evidence of metastatic disease, but with the involvement of at least four lymph nodes. New oncologist, great care taken, and now I’m off the Anastrozole and on Tamoxifen. Protocol: in three months a consult with the oncologist. In six months, another consult and appropriate scans, with radiation sometime in the future, and perhaps another surgery to remove the affected lymph nodes.

No person, and especially a male-bodied person, expects to experience what I have. I am extremely fortunate at this moment that I haven’t any metastasis and I count my blessings every day. I also take extremely good care of myself. Clean diet, exercise, cut way back on alcohol consumption to a level considered “safe.” I sleep well. I attend to my mental health and apply myself to my own very peculiar spiritual practice. Cancer in all forms is a terror. Breast cancer, because of its propensity to recur at seemingly any time, is particularly violent in the way it disrupts lives. male breast cancer is still a bit of a mystery and the medical industry is only now beginning to figure out how to deal with it. Breast cancer is still seen very much as a female malady, and it’s festooned in pink and all things “feminine.” It has even been suggested, by well-meaning friends and a family member or two, that it makes sense that I would get breast cancer because, well, I’m gay! As though, because I have some feminine attributes and understand from a very personal perspective how misogyny has imprisoned feminine folks of all genders from time immemorial, I would be more susceptible to getting this pink, lady disease. I am here to tell you that it wears blue, as well. And I hope that- while this disease should ALWAYS continue to center the women it’s victimized- empathy and an awareness of the stigma connected with men who walk this path, point us in the direction of more balanced care. And, men, we need to learn from the courageous women who have gone before us: Silence is not helpful. I am no less a “man” because of my orientation, nor am I less a man because some cells mutated in my breast tissue. We have to reach out to one another and stand together. Get loud. Get noticed. No one, no one, should have to face this battle in shame or alone.