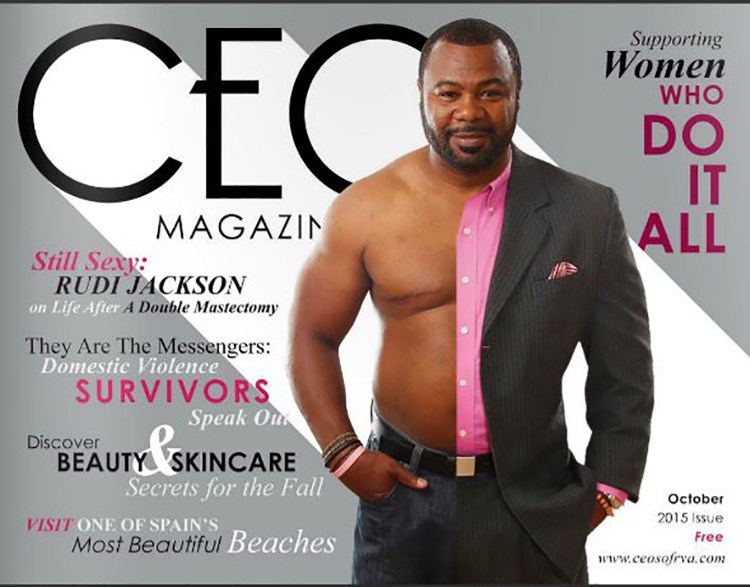 When I was 47-years-old I found a lump about the size of a pea, just under my right nipple while taking a shower in July of 2012. I waited a few weeks to see if it went away, then showed it to my mom who urged me to go see the doctor. My GP sent me to see a breast surgeon who performed a needle biopsy with the results coming back benign. All I knew was it did not belong there and I wanted it gone.  After discussions with the surgeon, we agreed to remove the lump.

The test results came back in about a week and I was diagnosed with breast cancer, specifically DCIS. I was surprised at the results since there was no family history, except for a first cousin on my mom’s side who had breast cancer. I knew men could get breast cancer, because I heard the actor Richard Roundtree was a survivor.

Within two weeks of learning my life-changing news, I was scheduled for a full mastectomy of my right breast. My nipple and all the breast tissue were removed, but because the cancer was caught so early, my muscle and lymph nodes luckily were not affected.  The drainage tube was removed two weeks later and I returned to work as a Community Outreach Coordinator at Virginia State University.

For me, early detection was what saved me from having to undergo chemo or radiation. I discussed the pros and cons of using Tamoxifen with my surgeon and he felt due to the stage of my cancer being so low (0), taking the drug would do more damage than good so we decided against it. I wasn’t interested in the possible side effect which I read included shrinking my testicles, impotence and even hot flashes.

I told my friends about my breast cancer from the beginning. I wasn’t embarrassed about it, because it is very important to share this type of experience so that others are made aware. They were as supportive and often called to check to see how I was doing or if I needed anything.  I made sure to tell them to check their own breasts too!

For the most part, life went back to normal…until one morning in March of 2014 when I woke up with a wet shirt because of a discharge from my left breast. I knew not to wait this one out and made an appointment to see the breast surgeon immediately.  The surgeon was a bit shocked to see me back again. My original cancer had metastasized and now there was DCIS in my left breast. Wanting to rid myself of this as soon as possible, a mastectomy on my left breast was scheduled immediately. I had genetic testing done and was negative for any mutations.

I now go for blood work and ultrasounds every six months just to be sure I’m all clean. My diet has changed to include more natural foods, more organic foods without growth hormones and pesticides. I am still a bit self-conscious when it comes to taking off my shirt. One day while lifting weights in the gym I had a young man question me about my scars, so I told him what happened. He then showed me a lump he had under his nipple. I told him straight out not to wait to get it checked.

My message to men is check yourself. I’m a living example that men can get breast cancer, but if caught early, it can sometimes be cured.