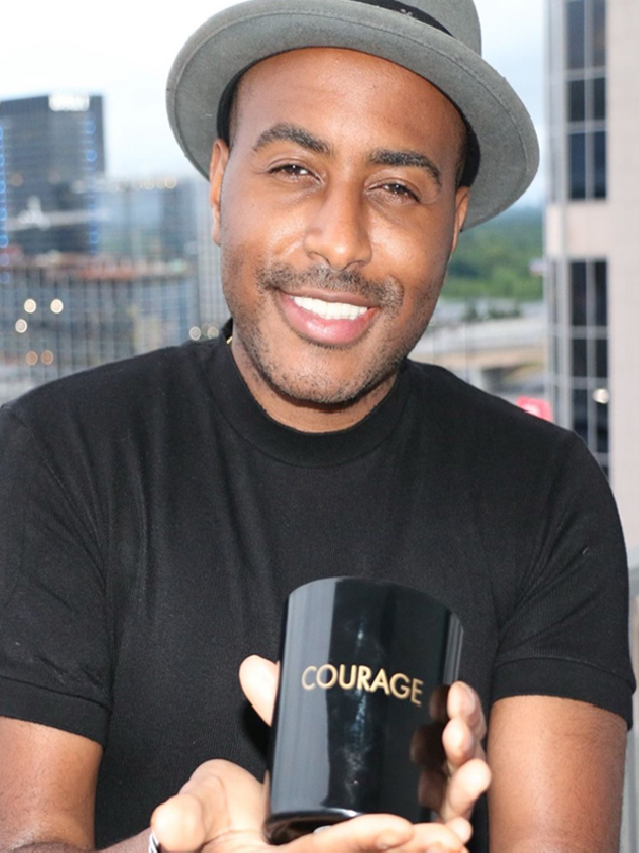 I’ve dedicated my life to service. Anything that I can do to bring about a change, awareness and to help others, is what I’m excited about. Kenneth Nelson

Early Diagnosis Can Save Your Life
I went in for what I thought was a typical routine check-up, and I came home with a cancer diagnosis in February 2018. There wasn’t much the doctor said that I heard after that. He was telling me that the allergy flare-up that I had attributed to the bicoastal move from New York City to Los Angeles was much more than that. The ingrown hair I got from my ritual of making my upper body less hairy was more than that. While my intuition to get my sinuses checked may have saved me, my life was actually in danger and, if I had I waited much longer, the consequences may have been worse. The doctor made it clear that I was a part of the one percent of men diagnosed with breast cancer. According to the National Breast Cancer Association, only one in a thousand men will ever be diagnosed with breast cancer.

He was telling me something that roughly only 2,000 men hear each year, that I had Stage II breast cancer. There I was, at the age of 34, in the midst of a thriving career. I’d made every actor’s dream trek. I had found work and had begun to establish a life in California. Yet, all I could think about was North Carolina. I remembered those days growing up as a chubby kid and I began to question if I mistook cancerous cells as the effects of weight loss. All I could think about was Grandma, who we lost to this disease. I remembered what it did to her – to us, as a family. Though it was unwarranted, I felt guilt. I couldn’t imagine the thought of putting another strain on my family, so, I chose to hide my diagnosis. It became my secret. I carried it neatly tucked inside of myself to protect myself and those I loved. Yet, the burden was too heavy for me to carry alone. I didn’t realize how much weight my family and friends were all willing to carry for me.

Most Men Don’t Like Going to The Doctor, But It’s Vital
I started treatment the week after I was diagnosed, and I am so thankful that I did. Though I had to stop working, a dear friend took me in and made sure I didn’t have to worry about financial stressors as I worked to be well. It’s so important to talk about your diagnosis with family and friends who love you, and that you trust. Typically, men don’t talk about breast cancer. They assume that it’s a female issue, but when it comes to your health false assumptions can be deadly. While the saying “Ignorance is bliss” is idealistic, ignorance can also cost you your life. While many believe that only women are affected with breast cancer, 400 men die each year from the disease in the US alone.

Determined that I would meet this battle with positivity, I started chemotherapy and radiation in great spirits. I had determined in my heart that cancer was not going to beat me. I was going to win.

However, during my second week of treatment my body began to respond to the effects of chemotherapy. I became dehydrated and couldn’t keep any food down. The positivity and confidence that I previously had, was beginning to wane. That people were beginning to speculate didn’t help.  I posted pictures of my life in sunny California to my social media platforms hoping that no one would notice my 30-pound weight loss. However, they did notice and I said nothing. I was fighting for my life and I didn’t have the energy to fight their gossip, too.

The hospitalizations became more frequent than I ever could have imagined. When treatment was over, hearing that I would have to begin it all again, because “cancer crumbs” remained, was news that hit an unsteady me even harder. There was a point when I really thought I was going to die. Not wanting to be alone when it happened, I began to sleep on a friend’s couch and realized that I was preparing for my own death. Optimism and positivity are daily choices we make, but few really understand how difficult it can be to choose life when everything around you suggest otherwise.

Advocacy for Men and Letting Go of the Stigma
I wanted to live. I had a reason to live. My beautiful son needed a father. He needed a father who fought and would encourage him to fight. He needed me and I needed him. And other men needed me as well. They needed me to be honest about how humbling and difficult a breast cancer diagnosis really is. They needed me to tell the truth about all the questions, the pain, the confusion and the frustration. And they needed me to tell them that it was possible to live after the diagnosis and after the treatment. That could only be true if I did it myself. I made the conscious decision that I had to become an advocate for my own healing.

I had to make immediate adjustments to my diet and re-focus on my health like never before. I fell in love with green juice and California’s medical marijuana provisions gave me back my appetite. I was feeling better emotionally and physically. I opened up and let a few people into the truth of my reality. I knew that it was still going to be a long road, but I wasn’t travelling on this journey by myself and I could see the light at the end of the tunnel.

Overcoming and Becoming a Thriver
Now, as a spokesperson for the Susan G. Komen Foundation in Los Angeles, I have the opportunity to speak for the men we’ve lost and those still with us as we fight against the stigma of male diagnosis. In this role, I am also able to discuss the disparities within treatment that leave Black people, Black women especially, vulnerable to high mortality rates. It is going to take all of us being just, fair and compassionate to see a world without cancer.

It has been eight months since my diagnosis and I recently celebrated three months cancer-free. I am healthier and happier than I have ever been in my life. I proudly wear my identity as a survivor as a badge of honor. I consider it my mission to remind the world that men get breast cancer too. We are here. We are fighting, and in the fight – we can “thrive”.