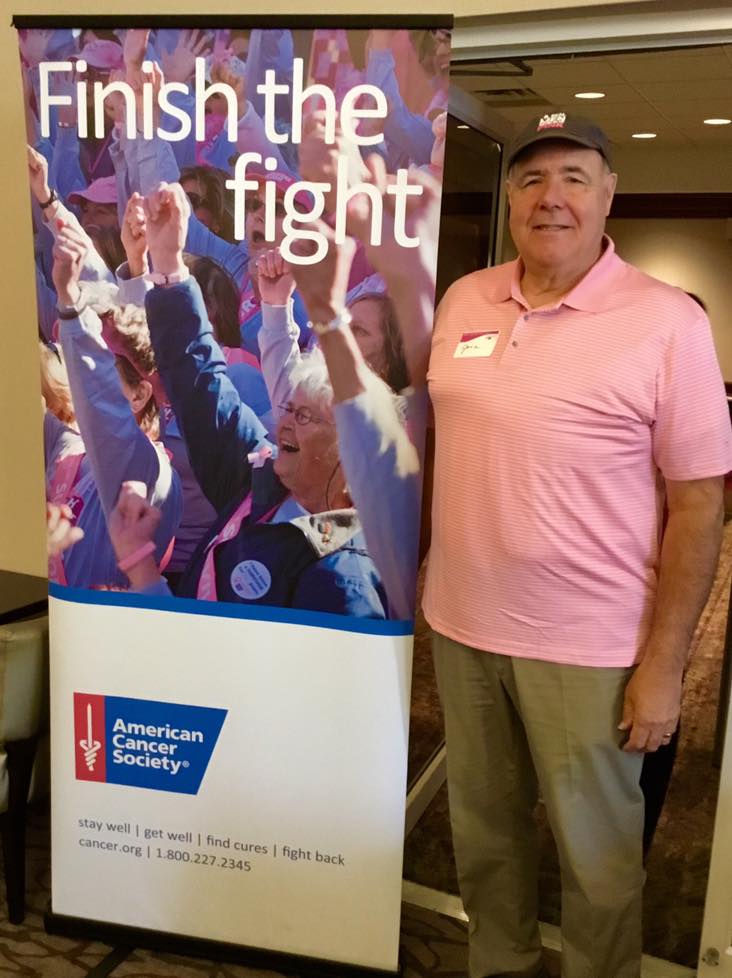 On May 6, 2013, my wife and I were laying in the bed and she felt a lump under my skin in my left breast. The lump was small but didn’t feel like an ingrown hair or a pimple (it was not raised). It felt like a hard pea under my skin. I felt the lump and agreed it didn’t feel like anything I’d ever felt before. My wife’s suggestion was to see our family physician.

By May 23, I had seen my PCP, had a mammography and biopsies, was told I had breast cancer, saw two surgeons, and had surgery. My left breast was removed and several lymph nodes to determine if the cancer had spread. Fortunately, it had not.

Prior to starting chemotherapy, I had a BRCA1 and BRCA2 Integrated Analysis tests performed. The results of this genetic testing were negative, with no significant findings.

By August 6, I had recovered from the mastectomy and seen two oncologists, and was starting my treatment. My chemotherapy lasted 12 months – first three months, weekly and the following 9 months, every three weeks. Radiation was not called for since the tumor was small and removed through the mastectomy, and the cancer had not spread.

I feel it is important to note that I think stress and being overweight has an impact on breast cancer, and cancer in general. A year before I was diagnosed, I was laid off from my job of 13 years, without notice, the day I returned from a vacation. Suddenly, without warning, I was an unemployed 64-year-old healthcare IT executive. I firmly believe the stress of seeking employment daily for a year and my overweight condition (I have since lost 80 pounds), had an impact on my cancer diagnosis.

Initially, we only told our sons and closest friends about my disease. It took almost a year for me to gradually talk to others about my breast cancer. Having a “women’s disease” can leave a man with a sense of humiliation. Almost everything out there, about breast cancer, addresses women having this disease. Besides the lack of information out there for men about breast cancer, breast cancer facilities, themselves, struggle with men and women in the same waiting room to be called for a mammogram and their results. Only after five years can I chuckle at the instructions included with my appointment notices, “please wear a two-piece outfit and notify us if you are menstruating.”

I have now become vocal in telling strangers about my breast cancer and educating all that, yes, men get breast cancer too. By participating in various events with the Making Strides Against Breast Cancer/Real Men Wear Pink/American Cancer Society, Susan G. Komen, The Donna Foundation, and the Male Breast Cancer Coalition, I hope to not only raise money for these causes, but also awareness that breast cancer can affect men. In joint efforts, we WILL end the stigma of men getting breast cancer and ultimately make more men’s birthdays happen. I look forward to continuing to help all these groups, wherever I can, be it speaking engagements, health fairs, fashion shows, running 5Ks (my wife and I never did things like this). After my diagnosis and us both losing weight, we have started to do these almost every weekend, as well as other breast cancer events.